How does it work ?

Despite the complexity of our latest subtitling project, which had to be transcribed, translated and subtitled in both Arabic and French, OSW successfully managed to provide us with high-quality subtitled videos. They were always strongly committed and went the extra mile to meet our standards and deadlines. Mike Todd, Director, Digital Training Solutions

I would highly recommend using  OSW for any type of translation. They are the only agency that has been able to turn work round quickly enough to meet my deadlines. We often use them to translate complex legal documents and they have never let us down. I have been able to develop a great working relationship with the staff and they truly understand my needs - they are all very helpful and always go the extra mile to accommodate me. Jacky Cragg, Granada Factuals

We have worked with OSW for years. We are delighted with the quality of the translation service, the speed of response and the competitive price. Mark Sacco Corporate Affairs Manager Newcastle College

OSW are professional, efficient and very user friendly! They recently met our requirements for a female Farsi speaker to be available on 24 hours notice to assist in three interviews. Where would we be without them! Barbara Smith, JWP Solicitors (Client since 2006)

OSW has supplied Town Talk Polish with high quality translations for our multi-lingual leaflets since 2001. We have been very impressed with the speed of service and the competitive prices and shall continue to use OSW for all our future translation needs. Vince Ball, Town Talk Polish

OSW has helped Chevin Housing Association by providing us with translation services in a drive to make our literature accessible to all of our Customers. OSW has been helpful, reliable and thoroughly professional at all times when dealing with our varied requests. OSW’s flexible approach has also meant that we have managed to save thousands of pounds on translation costs. Prices quoted by other similar organisations were much more expensive.  D Colclough, Chevin Housing Association

We were very pleased with the professionalism of OSW during the production of a CD which had 20 different translations within it. In particular, OSW were able to suggest the best ways that the work could be done and were always available when we needed to discuss the project. Phil Williams, Careers Europe

As a contracted supplier to the Healthcare Commission, OSW provides translations for promotional information for the Commission, as well as for more sensitive issues such as confidential queries and complaints. In all projects OSW has maintained a high level of discretion and professionalism, assisting us in our aim to improve communications with our service users. Abi Meredith, The Healthcare Commission

How does it work ? 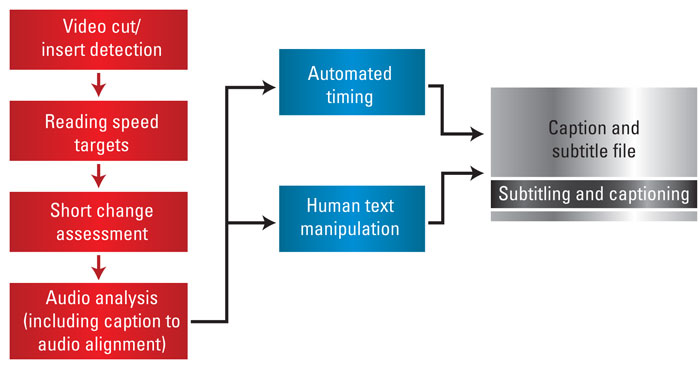 The space which we have in our translation is limited to 2 lines of subtitles which are usually placed and generally centred at the bottom of the screen. Each line cannot contain more than 35 characters (i.e. any letter, symbol or space). The subtitle (formed by 2 lines) can have up to 70 characters.

But, there is a direct relation between the duration of a subtitle and the number of characters that it can contain so that it can be read. These parameters are based on an average reading speed. We cannot read the same amount of text if we have 6 seconds or less. It is estimated that the current average reading speed is 3 words a second. So to read a complete subtitle of 2 lines and 70 characters, we will need at least 4 seconds, which house some 12 words. If we have less time, we must calculate less characters.

The subtitling carries a technical part which is the spotting of the subtitles. So, the translator should aim to calculate the moment in which the subtitles appear and disappear on the screen, so that the subtitles are synchronised with the audio. Also, the duration of the subtitles and the changes of the camera shot must be taken into account. When a change of shot is produced, the viewer tends to return to lowering their view and re-reading the subtitle, so one must consider, where possible, the shot and scene changes.

Therefore, the process of subtitling consists of the following phases:

– Spotting: Identifying the entrance and exit times of the subtitles synchronised with the audio, calculating the minimum and maximum duration times and considering the changes in camera shot and scene.

– Translation (adaptation): Translation from the original, adapting it and adjusting it to characters permitted according to the duration of the subtitle.

– Simulation: Representation of the translated subtitles with the image and the audio to check that they meet all of the criteria and that they can be read in a natural way.

– Correction of errors and readjustment of the text.

In terms of the adjustment, that is – the textual content of the subtitle, there is a series of basic criteria which follow in subtitling. The text which contains subtitles must be a natural text, with the same punctuation, spelling rules and natural language conventions. The language must not become unnatural when trying to adjust the number of characters, but it must reach an adjustment which is natural and correct. Some of the basic principle criteria are:

The ideal final result is that the subtitles are synchronised with the audiovisual document, in such a way that it sounds natural and fluent, so much so that the spectator is almost unaware that they are reading and is absorbed in the image, the audio and the text.